My writers' group, a little local chapter of SCBWI, met today. Per usual, we had some good fun and batted around a few pieces of writing like kitty cats, only more concerned with character development and commas.

When we were talking about scene versus summary (the old "showing versus telling" business), I remembered that I once wrote a blog post on the topic. I had looked through a bunch of books, mostly YA and MG, and analyzed how much showing versus telling each one did in its first fifty pages. (I analyzed one book, Harry Potter and the Philosopher's Stone, all the way through, and found that the numbers were similar to the numbers in the first fifty pages, so I decided that would be representative enough.)

I mentioned this blog post, and there was some interest from the group, especially in the pie charts I had made to show the scene-vs-summary breakdown of each book. When I went back just now to look at the post, though, I see that I have for some reason not included said pie charts! Happily, I still have all the work I did then, and I will post the pie charts now. Better late than never, right? And I do think they're pretty neat.

First, a recap of how I defined the four categories that appear on the charts. From my earlier blog post:

"I’m dividing each book into four types of sections. I call them Scene, Scene* (“scene-star”), Summary, and Summary*. “Scene” means a section that takes place entirely in the moment – dialogue, a blow-by-blow description of action, even a character’s thoughts – basically, anything that isn’t summarized. “Summary,” conversely, is stuff that doesn’t tell you exactly what’s happening right now. I found the two most common uses to be description and to note time passing. “Scene*” is any section that, overall, is definitely in the moment, but includes a non-negligible element of summary – say, several sentences of description, or a introduction that describes time having passed. “Summary*” is any section mostly not grounded in the moment, but with a smattering of lines that are, often a brief exchange of dialogue. Generally speaking, “Scene” and “Summary” correspond to the “Show” and “Tell” of writing. Not every book has all four section types. Howl’s Moving Castle, for example, had no Scene* at all."

First, because it's the only one for which I looked at the whole book, let's do Harry Potter and the Philosopher's Stone. 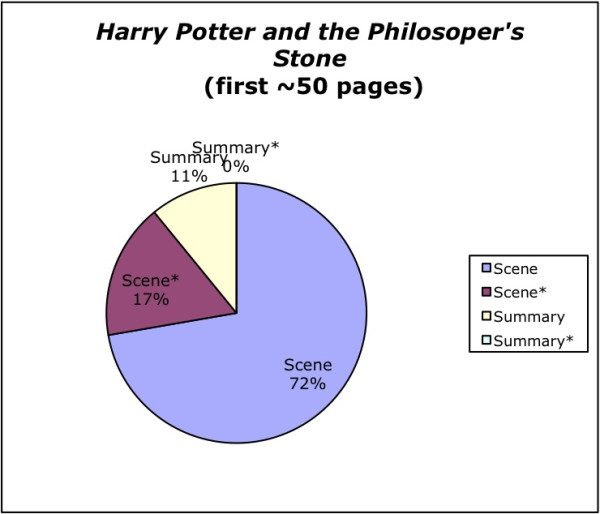 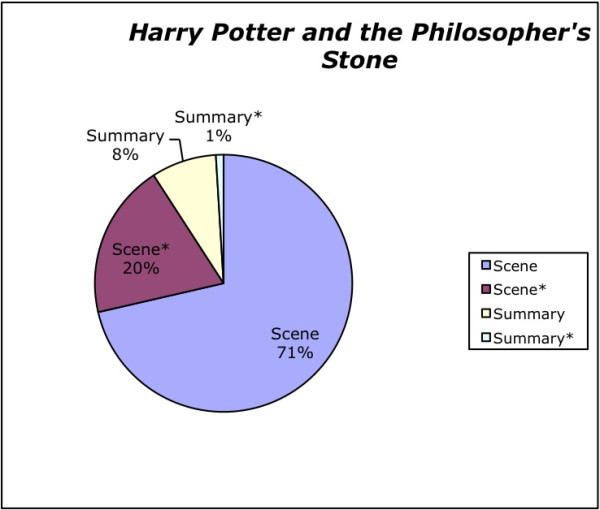 Next up: three books by my favorite author, Diana Wynne Jones. I analyzed Howl's Moving Castle and Dark Lord of Derkholm and its sequel, Year of the Griffin. 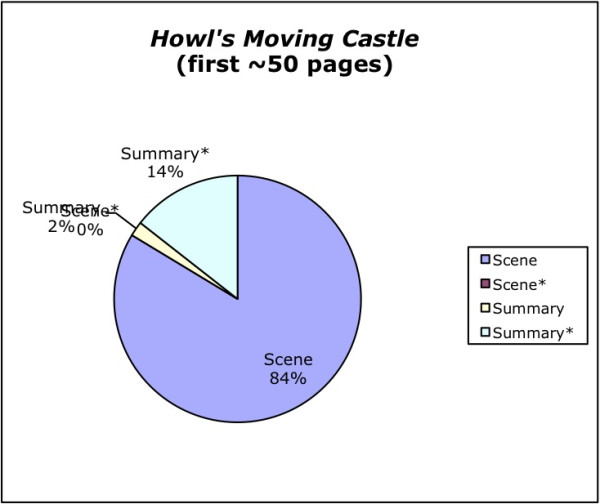 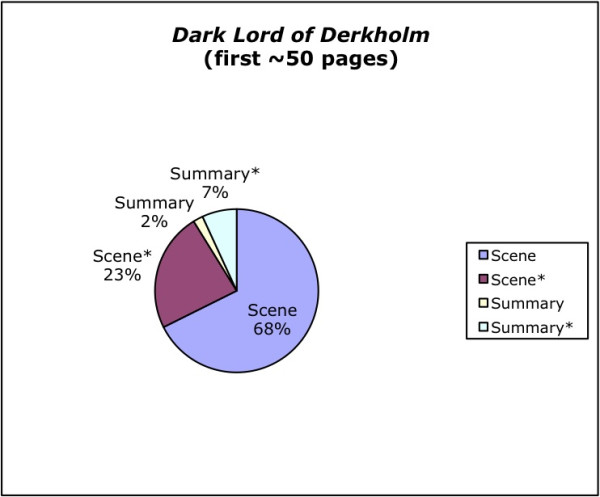 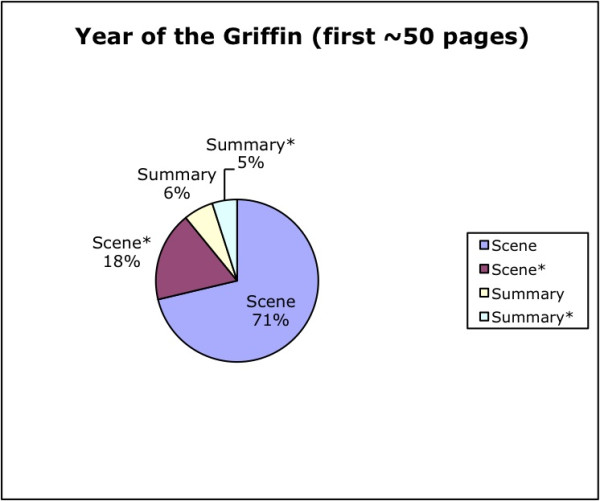 I also did the first two Twilight books by Stephanie Meyer. 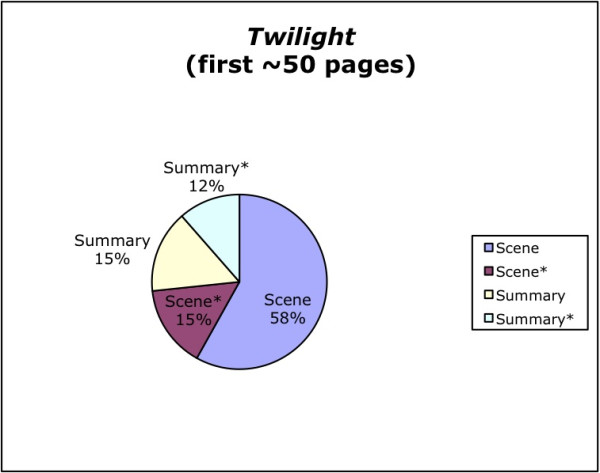 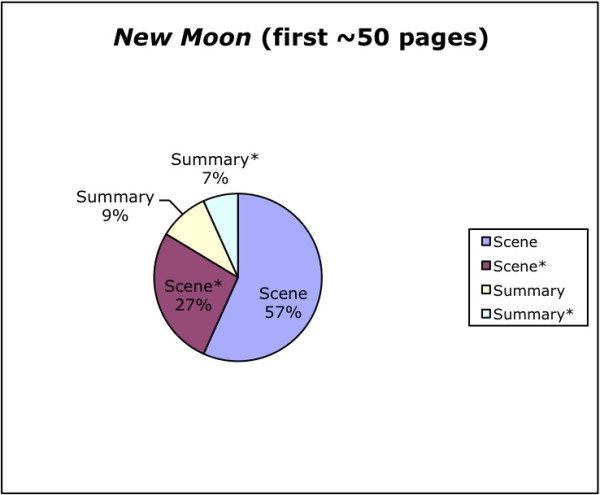 Here's the chart for a middle-grade fantasy I'd recently picked up, The Magickeepers: The Eternal Hourglass by Erica Kirov: 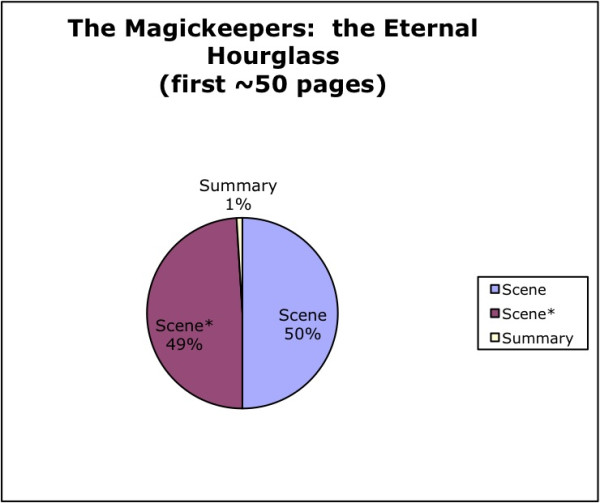 For something a little different (but still fantasy, because yeah, okay, they kind of all are), Mort by Sir Terry Pratchett. 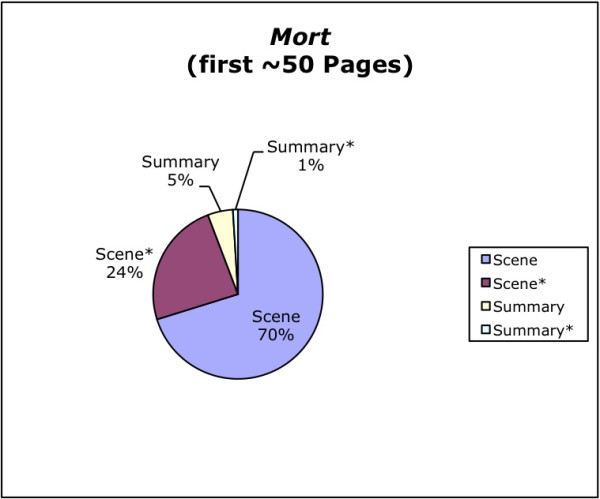 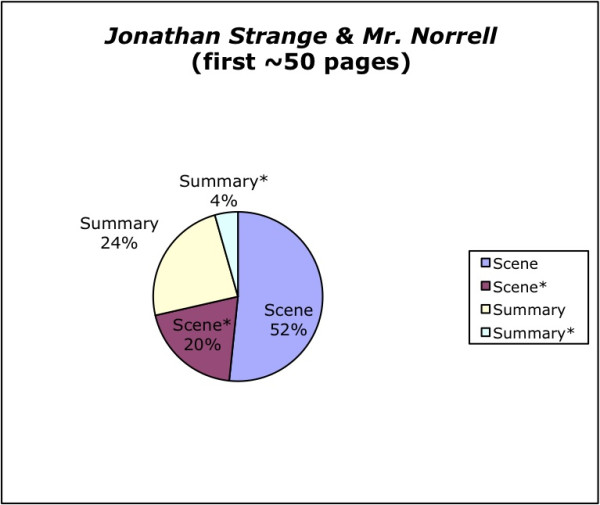 Yay pie charts! Hope you find these interesting. Any thoughts on the results?
Collapse